Stories of visitation and prophecy exist all throughout the world of legend and lore. This is a three player game that encompasses a year in the life of three children who have been visited by a divine spirit. What would you do? Who would you tell? Who would believe you? Are you ready for when She returns?

This is a no prep, GMless ttrpg created for the Folklore Game Jam.

Weave together a tale as children who receive a divine visitation. Answer the prompts and move through the seasons in a year as things change and are revealed.

What will you do when She returns?

The cards contain everything you need for a print and play of the game. This including a set of the rules printed on the cards so that the whole game can travel simply and neatly.

The full game has an additional cover and rules page.

A simplified text document is also included for ease of use with instructions for how to play online or without printing the cards.

Special thanks to Jordan (@MadeOfCartoons) for all the help with card formatting and the title page and to Rena (@vluscinias) for the beautiful photos of the game out in the world.

*Update: New printable zine version lets you have the game in booklet form.
- Details in Devlog

In order to download this game you must purchase it at or above the minimum price of $5 USD. You will get access to the following files:

Support this game at or above a special price point to receive something exclusive.

Purchase copies for the Community

A copy for you and one for the community.

Thank you so much!

If you want to play this game but aren't able to support monetarily right now, please feel free to take a Community Copy.

Our Lady is a 20 page storytelling rpg for three players where you play as people who were visited by a divine presence, which will return again in a year.

It's played using a deck of cards (which makes up the majority of the 20 pages) containing the game's prompts and rules. Gameplay consists of answering the prompts, and then elaborating on them---spinning out a story with occasional slight nudges from the game.

Our Lady does not hand you a fully formed story in the cards, and it really wants you to do the legwork yourself. You set up the circumstances, you define the characters, and you also have a lot of control over how you interpret the questions on the cards. This gives you a bunch of creative freedom, but may be tricky if you're not comfortable with games being this open-ended.

What's the recommended playercount/can it be played singleplayer?

Hey Feademon, the game is listed as 3 players because it's based on a story with 3 people but I've seen it played with as few as 2 and as many as 5. You just need to change up the amount of cards you draw.

You could totally play it solo. Just draw the cards and answer the prompts  like you are the only one to receive this visitation and skip any cards that are about the group of you.

A great storytelling game that reminds me of Quiet Year and For the Queen. The goddess has performed miracles and given you gifts, and you know she will return in a year. You answer questions throughout the seasons and you relationship with her changes. The cards are beautifully designed, with evocative prompts that sometimes ask hard questions about your relationship with The Lady.

Thanks again for checking out my game and the nice comments! <3

This game is wonderful! The prompts give enough direction to create a lush narrative while still being broad enough to create a truly unique setting. The replayablilty is huge - in both story content and tone.

If you enjoy collaborative storytelling and worldbuilding, I couldn't recommend this enough!

This is a beautiful narrative prompt game that not only encouraged us to create a rich story about our three children and their divine visitation, but also organically built up a whole world around them (we did not use our modern world as the setting). Further, I found myself unintentionally slipping into an understanding of being a confused child in an adult world who has a million questions and not enough answers. It's a very deep game if you let it be, and I really enjoyed playing it.

This is a wonderfully flexible game that can lead to very fun and endearing stories.  It is beautiful and simple in its design and look, yet deviously deep depending on your prompts. 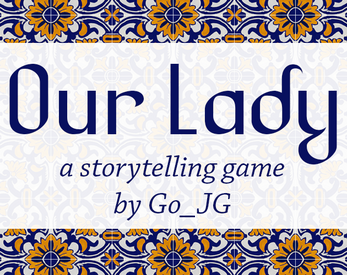 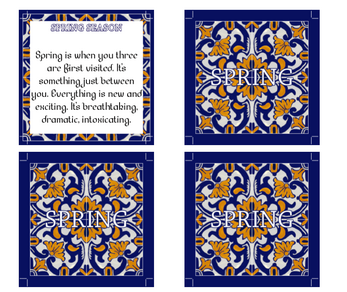 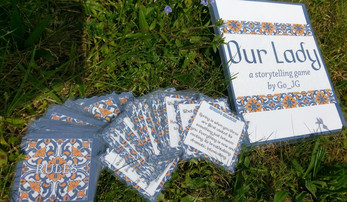 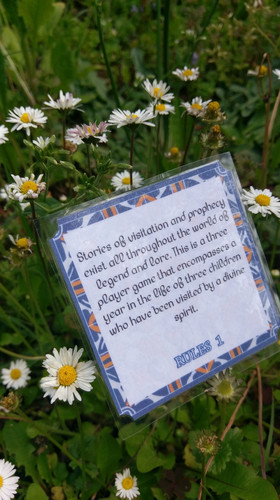 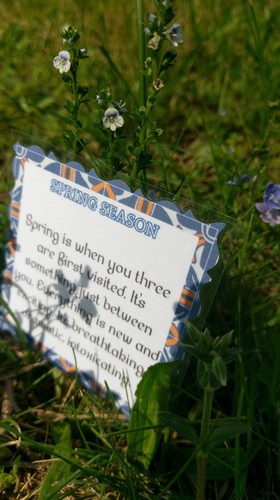