A silly larpy performative art game about yeeting gross people into the sun.

Got anyone being shitty? Treat yourself to a good yeet!

This game was written quickly over a day after a friend was temporarily banned from Twitter for saying Terfs and Nazi's should be sent to the sun.
Well in this game you can do just that!

Updates will be incoming for clarity and ease of use, as well as a text doc for e-readers.

Entered into the #FraudulentGaysJam because if anyone tries to tell you how to be "correctly" gay, they need to be thrown into the sun.

The Fraudulent Gays Game Jam was created by myself and MeghanlynnFTW

If you play this or any of my other games, feels free to tell me all about it!

Oh my gosh! I'm so glad y'all had a great yeet!

is this a solo game or is it meant to be multiplayer?

It's a really quick and easy solo game but you could totes trade scenarios with your friends and compare and contrast who you yeeted into the sun.

Although by a different designer than BAD MOON, this feels almost like a companion piece or counterpoint.

Game is sort of a loose term here. You play by throwing someone into the sun and then getting away with it. There's tables to help with this, and the whole thing has a sort of ritual feel.

Probably underrated here is the game's layout, which I think if someone had showed to me without any text and said "it's about polite anger", I would have immediately agreed. Again, like BAD MOON, the layout and the rules are on exactly the same wavelength, and it's strongly internally consistent, which makes it pretty punchy despite the half-jokey tone.

I had never head of BAD MOON before. I'm going to check it out because of this comment. Thanks for taking the time to check out my game.

I had actually had a conversation about this with my friends, fun to find that there's a game based off of it! We will definitely be playing, either over the phone or when it's safe to hang out again!

I love this. I hope you have some good laughs. <3

A game that plays like a poem to help vent frustration against particular hateful parties.

Well, I'm not really pro-violence but I'm not against stories!

I rolled dice. And I had to eat the transphobes, but I don't eat non-consenting animals. Plus they probably taste bad ;) So, they made a one-way trip to the sun. I promise, they suddenly were attracted by this shiny sun!

Thanks for this quick & funny game!

Hey thanks for trying my game!

I'm glad you were able to eventually find a trip to the sun that worked for you. XD
It's definitely meant to be more of a quick silly game with a ridiculous  end for some icky people. I was thinking of rewording some of it to make it clearly more cartoonish then actually violent so thank you for the feedback! <3 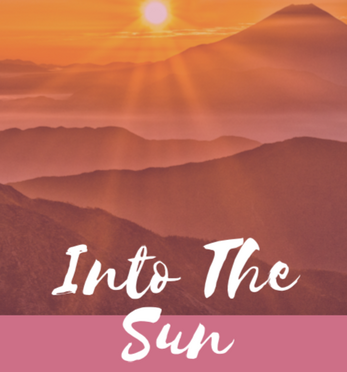 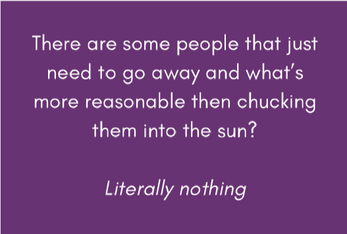 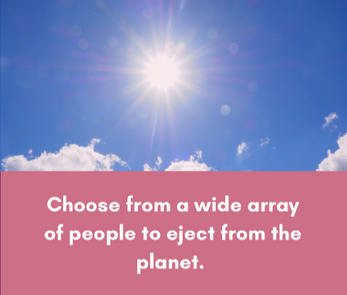 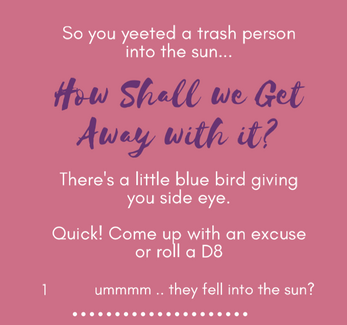